Keeping Students “Ahead of the Game”

Keeping Students “Ahead of the Game”

Former CFL player. Motivational speaker. Life coach. Youth-mentor. These are just some of the titles that describe who Jonathan Hood is.

Growing up in a single-parent home in Mississauga, Ont. Jonathan’s first dream was to play professional football.

“I loved playing football. I loved the contact, I loved being able to go out there and hit someone, but I also liked getting hit because it gave me adrenaline,” said Hood.

Hood got his chance to fulfil his dream in 2008 when he was drafted by the Edmonton Eskimos of the Canadian Football League (CFL). From there he went on to play professional football for four years with two different teams, The Hamilton Tiger-Cats and the Toronto Argonauts.

While football remained his love, Jonathan noticed that he was starting to develop a new passion: mentoring.

“One thing I really loved about football was the community appearances we did. I loved going out to the schools and talking to the kids, because I was able to inspire them and give them positivity,” said Hood.

From there Jonathan found his new calling. In 2011 he founded “Ahead of the Game” which is a youth mentoring program designed to empower youth and promote positive change.

Along with “Ahead of the Game” he also hosts an annual charity football game through his non-for-profit group called “The GTA Youth Athletics Club.” He is also an ambassador for “Right to Play,” Canadian Tire’s Jumpstart program and Aqua-hydrate Water, just to name a few.

The program is designed specifically to help “side-lined” youthreach their full potential in a safe environment, which isn’t always the case for most students according to Jonathan,

“The whole goal for us is to give students a chance, because I know they have a lot to say and we just want to give them a safe space where they can realize their own potential,” said Jonathan.

Now most people would think that jumping from football to youth-mentoring is a little unusual, seeing as the physicality of the sport contradicts the positive and nurturing nature of “Ahead of the Game” but Jonathan says there are parallels between the two,

Since its inception, “Ahead of the Game” has appeared in over 25 schools across the GTA and has serviced over 1000 kids, youth and young adults.

The program has also gained a great reputation within the community as it has a 91 per cent success rate for students who took the program,

“The Ahead of The Game mentorship group has been a tremendous success for everyone involved at Sandalwood Heights Secondary School. Through this program, each student has truly realized their full potential,” said William Ryan Greer, a teacher at Sandalwood.

One of the many reasons why Jonathan chose to create a youth-mentoring program is because he knows first-hand the benefits mentoring can have for young students, and knows that with the right motivation, students can achieve their dreams.

“I wouldn’t be here today without the help from my mentors. They were able to give me positive feedback and they also allowed me to fail while still offering me support,” said Jonathan.

“I firmly believe that if I had the opportunity to participate in a program such as ours, I would have developed leadership skills and been motivated to achieve my goals at an earlier age,” said Jonathan.

Some people may say that youth-mentoring is a challenging profession, as it is sometimes hard to break through and make a difference in the lives of students, but Jonathan wouldn’t have it any other way.

“You got to give in order to receive. If you don’t give then you’re just taking for free and that’s stealing, so I just feel it’s in my blood to give and what better thing to give than your love and attention,” said Jonathan.

Full audio version of the interview is available on Soundcloud. 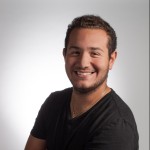 About the Author / Francesco Lo Presti

Is a fourth-year Media Studies student who's dream is to become a Sports Broadcaster. Has a strong love for sports, especially soccer and if you haven't already noticed, is very Italian.