Sports media has become an impersonal world, filled with broad stories and accompanied by a rotating cast of television personalities. Homestand Sports strives to change how we view sports by building from key points like no script, a casual venue, lots of beer and finding entertaining people that fans trust.

Homestand Sports is a Toronto-based media company that produces live events; focusing on bringing the fan closer to the game they know best. This engagement between fans and the media is what’s been the missing piece in connecting both worlds together.

Founder Kevin Kennedy launched Homestand Sports building on the idea that many fans don’t get the full story that mainstream sports media outlets are providing. Starting in 2014 with Pitch Talks to a crowd of 30 hardcore baseball fans, he’s now produced shows in several cities across North America.

“I wanted to bring the fans a little bit closer and it’s also a fact that you know players these days and athletes make millions of dollars,” said Kennedy. “They’re not like us. They don’t live the same lives as us and the distance between athletes and the fans is just growing and growing and growing.”

Steadily, sports fans have become tired with how straightforward larger companies are in the sports news they produce. Most give the general story, but don’t actually dive any deeper to find out what the real story is. There’s a misconnection with mainstream media, as their coverage is commercialized and isn’t usually meant for the “cerebral sports fan.”

“It’s a problem in our mainstream sports media that the anchors of the shows that we have are becoming less and less of a personality. They’re sort of swapped in and out on Sportscentre. They’re often woman and they’re not given a chance to give their opinion…they represent the fans a lot more than what we’re seeing on TV right now,” said Kennedy.

Homestand Sports pride themselves on the inclusion of female hosts and have the audience engage with them on a more personal level. Systematically, most executives in the sports industry are men that tend to hire other men. According to Kennedy, women aren’t given the same chances as men and he’s trying to make a change.

“If I wanted more than one person on the panel who’s a woman I’ve literally got to put them on an airplane and fly them to Toronto…If I’m doing Pitch Talks in Toronto, trying to get some local writers, there are no women. Sure there are bloggers and fans, but if I want someone really in the media I’ve got to go outside of the market,” said Kennedy.

Over the years Kennedy and partner Noah Frankel have had a lengthy list of special guests join their various discussion panels. From big name broadcasters, to former management and even celebrity sports fans, Homestand Sports always has a list of guests designated to giving the fans what they want, in regards to sports media.

“My favourite panellist is probably a guy named Bob Kendrick. We flew him in a couple weeks ago from Kansas City. He’s the head of the Negro Baseball Museum in Kansas City. Besides from you know his knowledge of baseball and his knowledge of sport, he really taught me and I think a lot of the audience. Why the show was such a success is it really teaches you how to act as a person and be as a person. You don’t really see that when it comes to watching Sportsnet or TSN,” said Frankel.

Although Homestand Sports began with the speaker series Pitch Talks, they’ve expanded to produce conversations about hockey (Puck Talks), basketball (Hoop Talks), soccer (Footy Talks), football (Tackle Talks), and wrestling (Ring Talks). In the future, they plan on branching out into different sports to include Huddle Talks and Indy Talks.

Homestand Sports has built a devout following of sports fans willing to join them for a night of what they love most, talking about sports. Where else are they going to get to do that with some of the most prolific people in the business itself?

These kinds of connections and interactions could be the future of all sports media. While Sportscentre is able to replace hosts as they se fit, fans want to be able to resonate with the person telling them the scores. Just look at what happened when Jay Onriat and Dan O’Toole left TSN for Fox Sports in 2013.

Its time for puck drop. See you at the game. 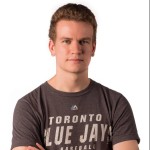