From Josh to Khaliowe: A Young Musician’s Journey to Success

From Josh to Khaliowe: A Young Musician’s Journey to Success

Josh Samadhin’s basement studio is home to his musical artistry.

His closet covers one side of his space, and his studio equipment lines the other. To him, music is not just a method of expression, but a way of connecting and being openly vulnerable.

“I would just rap at my high school (John Fraser Secondary), do little freestyles after school, I’d do rap. I loved the energy that went around during that time, the positivity, the hype.”

Samadhin (a.k.a Khaliowe) made his first track in his dorm room and knew he wanted his passion to be his career.

“There was this show I did, it wasn’t too serious, but I could see people singing back my words. The ones who didn’t know the lyrics were looking at the ones who did, and that whole vibe in the room, the connection, felt amazing,” says Samadhin.

And his second-year dormitory was where it all began.

“One day I was in my dorm and I had a smaller setup. I had an idea from this one youtube video my friend had shown me. So I made a quick little track, I thought it was pretty cool.”

He then posted it on Soundcloud, hoping that other people would like it too. And after a few slow weeks, his music got the attention he hoped it would:

“I kept putting stuff up and all of a sudden it got picked up. People started listening to it, and once it picked up I felt like yes, I think I can do something with this….I used to sing in choirs, but I never really immersed myself in music. I wanted to play sports and chill with my friends. But it wasn’t until that moment in the second year when I created that song and see how it grew that I figured I could create a lot of things by myself,” says Samadhin.

And so, Khaliowe was born.

“That’s just parts of my two middle names that I squished together,” he says. For him, recognition was important, but so was authenticity.

The idea was to stand out from the crowd and “make people ask” what it meant. That way, people remember it better, says Samadhin.

“The best form of advertisement is testimony. So when someone asks what’s this person’s name, and a friend of mine tells you it’s Khaliowe, you have a much higher chance of retaining it than if I were to be like oh, my name is something really basic,” he says.

On being asked about his inspiration, Samadhin points right at his vision board that sits across his studio mic with “Work with PARTYNEXTDOOR” listed as one of his goals for 2018.

“There was this image of rappers and male musicians back in the day where they had to be tough. They didn’t really expose their vulnerable/softer sides as such. But PARTYNEXTDOOR is one of the artists I connect with most.” The musician is mysterious yet vulnerable, which has influenced Samadin’s style.

For him, it’s the constant need to improve and evolve that drives his progress. “I hear myself getting better, but I still constantly feel the need to improve and feel like I have a lot to learn. I want people to be able to connect to my music,” says Samadhin.

The big question for Samadhin is about success. What does success mean to him? Happiness.

“I’ve been thinking about this a lot lately, and what happiness actually is. Because if we’re being honest, you can never hold on to anything, physical or non-physical, till forever. So success to me is finding happiness.”

It’s not something that can be quantified or limited, he says. “I just feel like things will happen by themselves along with me working hard, and success will be a product of that hard work and dedication.”

He also says that being afraid of making mistakes limits creativity, and that one shouldn’t be afraid to take leaps of faith.

“My biggest advice to young artists I would say, is go, create. And make mistakes. Because as a new anything- say entrepreneur or engineer or musician, anything you do “new” might make you super uncomfortable especially because you’re scared of what’s on the other side of the door. But what’s the worst that could happen?” says Samadhin. 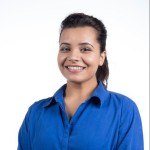 About the Author / Simrit Bajwa