The word ‘news’ used to be less of a noun and more of a verb: it was an activity that people did at set times of day, and through specific media: a television, a newspaper, a radio or word of mouth. That’s not the case any more, when anyone can pull out a camera and be a part of the news on their way to work.

Today, the ways people consume news seem like they double every month. With more ways to read, watch and listen (or do all at once), comes more ways for news to be captured and disseminated. In this fast-paced world, professional journalists can’t be everywhere, so regular people are sharing their role.

Those who film newsworthy events are not necessarily journalists, but rather primary sources.

But there can  be complications surrounding who should be considered a journalist. With today’s technology, “anyone has the ability to tell their own story”, but not everyone have the training of a professional, said Jackie Zammuto, the program manager of WITNESS, an international non-profit organization that trains and supports people in filming human rights abuse.

When people hear the words ‘citizen journalist,’ different ideas or definitions present themselves. Since there are many terms describing the phenomenon of filming a public event and uploading it to social media, it can be confusing to know what it should be called. The dilemma surrounding this term has resulted in the title of ‘witness journalist,’ which many people see as the most accurate.

“In terms of ‘citizen journalism’ versus ‘witness journalism’, we’ve been trying to step away from the former, just given the obvious complications around the term ‘citizenship’,” said Zammuto.

Globe and Mail national reporter Eric Andrew-Gee published a story in July, 2014, that discussed the impact witness footage had on the Sammy Yatim case, in which a teen was shot and killed on a streetcar by a Toronto police officer. Gee said he believes citizen journalism is an overused and misused term. “Re-reading my Yatim piece, I was reminded of the extent to which actual professional journalists were required to flesh out all kinds of details of the incident,” Andrew-Gee said, including “the identity of the police officer who fired the shots and all kinds of background about Yatim; interviewing witnesses on the streetcar to get a picture of what Yatim was up to before the altercation; the police and, of course, all the reaction following the trial.”

Gee said those who film newsworthy events are not necessarily journalists, but rather primary sources. He explained that this kind of footage is “an excellent source” for its “incontrovertible” nature and journalists should, and often do, use these witness videos as starting points for their investigations and stories.

“For the most part, people are filming to document and expose abuses as they see them happening,” said Zammuto. She said incidents of police violence exposed by witness journalists generally happen in communities that either aren’t covered by the media, or don’t have their stories told accurately. “I think the kind of massive ability to use cell phone video to document these abuses has enabled a lot of communities to speak up, and to share what’s happening and what they’re experiencing on a day-to-day basis,” said Amy Smith of PEN Canada, which works to free persecuted writers and fight against censorship.

Witness videos, Zammuto said, are vital to providing a strong counter-narrative to the ‘official story’ put out by authorities and what mainstream media might say that’s based on that story. She cited the example of the Alton Sterling in New Orleans. Abdullah Muflahi, the man who filmed Alton Sterling being shot by police, waited until after the police report came out to release his video. As a result, his video directly contradicted the police report. Unedited video can be powerful court evidence, said Zammuto, and “has an enormous potential to mobilize people and to really provoke calls of outrage and calls for investigations.”

Smith said that the major concern with witness journalists is a “lack of oversight.” If a journalist does not have personal evidence of an event occurring, it’s important for them to have three separate sources to verify facts. “Making sure that fact-checking is happening, and that accuracy is there, [are things] for which a citizen journalist may not be held accountable,” said Smith. She added that witness journalists don’t have the benefit of relying on a structured media organization to hold them accountable for fact-checking to ensure the story is right.

Zammuto echoed this point, adding “that’s kind of a complication with the term ‘witness journalist’. A witness is generally someone who ‘happens’ upon something, whereas a journalist is there to cover a story or, if something happens, is covering it from a specific angle or beat.” She said there are many blurred lines between a professional journalist and a witness journalist. Andrew-Gee said Martin Baron, the man who filmed the viral video of Sammy Yatim being shot, had been filming “almost incidentally.” Andrew-Gee noted, “he had no idea that it was going to be significant when he hit record. I don’t think he would call what he was doing journalism.”

“I think, one of the ways that we think about citizen journalists … is that kind of bystander notion,” said Zammuto. “In a lot of places, like Syria, it’s people who are living in dire situations, in a conflict, who used to be pharmacists, or teachers, but there are no means to do that type of profession where they live any more. So instead of picking up a gun, they choose to pick up a camera to document and expose what’s happening.”

For Zammuto, those are the people doing journalism. They are people like Bana Alabed, a Syrian girl whose Twitter account rose to popularity and faced scrutiny when she posted tweets, photos and videos documenting the siege in Aleppo. Smith said witness journalists definitely have the advantage of being there when events happen, “whereas newsrooms might have to dispatch a reporter” which takes time. She said major media organizations that are struggling financially have to make decisions about which stories to cover. Furthermore, they may not have the financial resources to hire talented people. Witness journalists, she said, help “bridge that gap.”

“I do think that it’s filling a gap, but it is a little nerve-wracking that you don’t have a source you can necessarily trust,” Smith said. “Although I think that’s something that we’re all kind of looking at these days: who, or what, sources can we trust?”

This story first appeared in the EMERGE print magazine.

This gallery shows the world around us is constantly changing in seconds.
From seven strangers’ stories, a second of their lives was captured.
A second being attached to a phone.
Make every s e c o n d count. 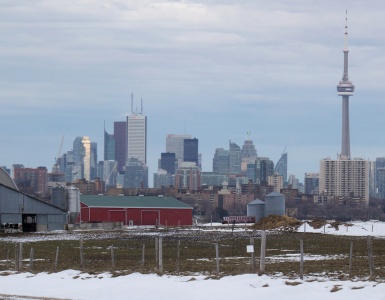 What things motivate young people to move to small towns far from the cities in which they grew up or attended university? On the other hand, what motivates them to stay in cities like Toronto? Either way, the place you love after graduating means...

This story is a selected feature from the 2017 EMERGE print magazine.